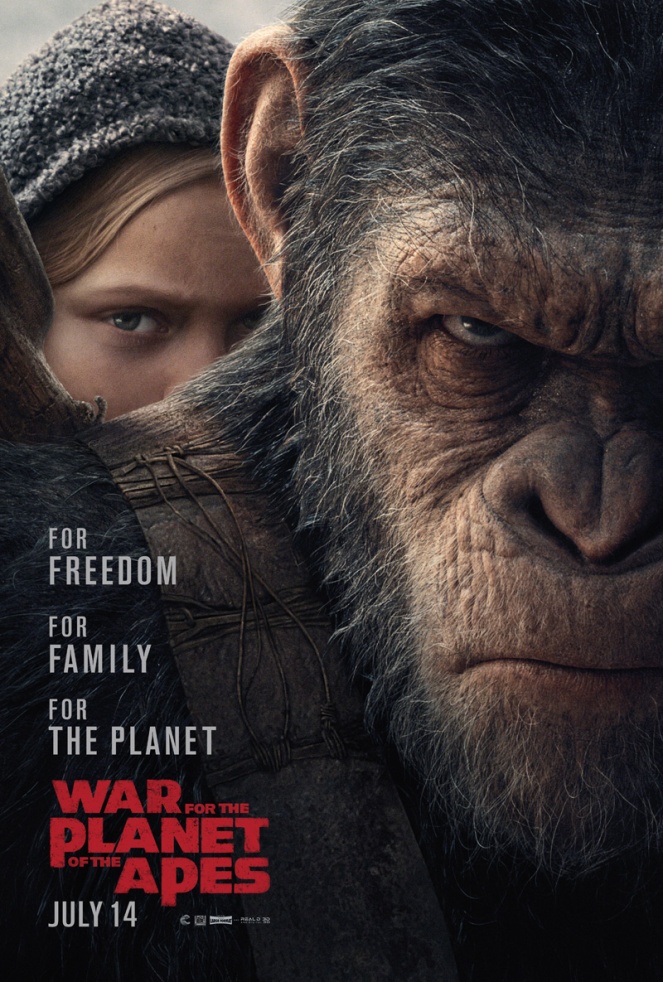 War for the Planet of the Apes is the third and final chapter of this blockbuster franchise about the war between humans and apes. Ceasar and his apes were forced to engage in a deadly fight with an army of humans after experiencing a great loss within their group by an army led by a ruthless Colonel. In the end, both species will fight each other for survival and supremacy in the planet. This movie is directed by Matt Reeves under 20th Century Fox.

War for the Planet for the Apes is truly a ground-breaking film in Hollywood for being the best in the franchise and for bringing a visually-impressive production that will truly be memorable in the history of Hollywood film-making. Aside from being way better than the first two installments, the movie is also a rare example of Trilogy films that actually gets better and better after their predecessors. I really love the succession of the Trilogy from the Rise of the Planet of the Apes to the Dawn of the Planet of the Apes. The narration in the first part somehow justified the existence of the War for the Planet of the Apes. Overall, it was the best way to conclude this Hollywood Masterpiece. Plot-wise, the movie has a lot to offer especially from impressive Ape-to-ape scenes that are really so amazing to watch on-screen. Also, the story-telling of the last film is creatively conceptualized focusing more on the emotional aspect of the characters and supported by brilliantly-executed action sequences. The story’s phase is generally subtle since the story is leaning towards visually-engaging scenes and some interesting scenes especially on the interaction of Apes with each other. Moreover, the movie is emotionally-engaging and truly disturbing at times. Its main strength is its Cinematography and Editing. Everything was so on-point and accurate. Since it involves much of the Apes this time, the film really demanded for a very big production. Of course, the movie did not disappoint on this aspect. It was one of the breakthrough film in Hollywood that redefined film-making techniques nowadays. I am really impressed with the production design. What I also like about the film is the injection of a little humor. I won’t spoil who will be the character who will bring a little bit of spice in this dark film but actually, I find it very bold and effective to insert a quirky character despite the very serious tone demand of the whole plot. If you are fan of the first two films, there is no other way that you would not love War for the Planet of the Apes.

Well for those asking for adrenaline-pumping scenes and action sequences, you might find War for the Planet of the Apes a little bit boring, weary, subtle and downplayed most of the times. Expect more Apes-to-Apes encounter on this 3rd and final installment so your eyes are glued mostly in the sub-titles interpreting the conversations of the Apes.