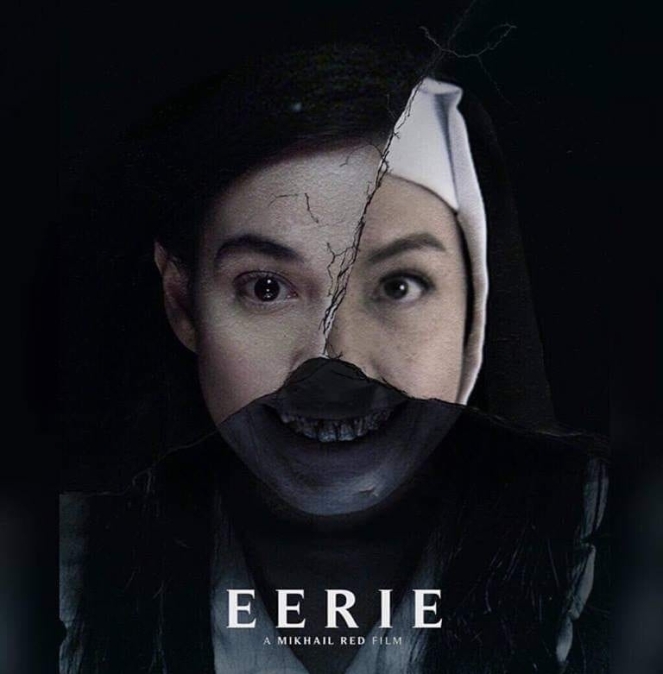 The unexpected and gruesome death of a student threatens the existence of an old Catholic school for girls. Pat Consolacion, the school guidance counselor, involves herself with the students in the hopes of helping them cope, and at the same time uncover the mysteries of the student’s death. Most students suspect of the strict and borderline abusive Mother Alice, who also threatened Pat’s tenure in the school because of her continuous meddling with the case. But Pat’s unusual talents lead her to knowing Eri, a former student who’s been watching the whole school for years. Piece by piece, Pat uncovers the secret of the school and the monster that it nurtured for the past century. This movie is directed by Mikhail Red under Star Cinema.

Eerie is another milestone in the Pinoy Horror Genre in terms of quality. Star Cinema didn’t disappoint again, Overall, Eerie is a refreshing flick in the Pinoy Horror Genre. What I like about Eerie is the consistency of its Cinematography. From the color grading down to the camera angles, the whole film is downright creepy, dark & gloomy. The feels complimented well with the 1995 setting and the production & set elements were consistent too. The location is superb. The school really looks scary and the atmosphere is heavy and haunting to say the least. Musical Scoring is really one of the film’s strengths too. As a Horror Film, Eerie was effective in bringing solid jump-out scares & thrilling moments. Some of the dark scenes were utilized well and there were some unique scares introduced in the film. Prosthetics was on-point and there were no obvious CGI or special effects used making the whole film even scarier.  Plot-wise, it was direct and the plot slowly unfolds as the story progresses. Bea Alonzo nailed her role. She was just pure joy to watch. On her first ever role in a Horror Film, she was at her best. Charo Santos was also good in the film. She was also effective as a scary and strict nun. Overall, Eerie is a fun-flick to watch if you are in for some scream-fest. Truly, proud to be Filipino-made.

Eerie may be effective as a creepy Horror Film but how I wished they could have invested more on the Plot Twist and some elements of the story line as a whole.  The twist was a little half-baked for me. I expected it to be darker and more evil. The reason why I wanted it to go further is because the elements and cinematography are really great a& impressive already. For these kind of movies, I expected more evil. Also, I have some problems with some of the character developments. Charo Santos’ role was not developed well especially on the reveal. I really expected her vital role in the film’s premise but for me, her role went into a downhill after her confrontation with Bea in her bedroom. As an investigator, I find Jake’s role to be useless in the film. His screen time was not enough for his role to be justified. Other than that, I find some of the student’s personality to be vague. At some point, I can’t identify if who is Clara or Erika or Joyce. LOL. Also, I see some similarities on some of the scare techniques used since it is patterned with the Hollywood Horror Formula. Nevertheless, Eerie is a must watch for Horror-lovers. Just watch it with your own risk.