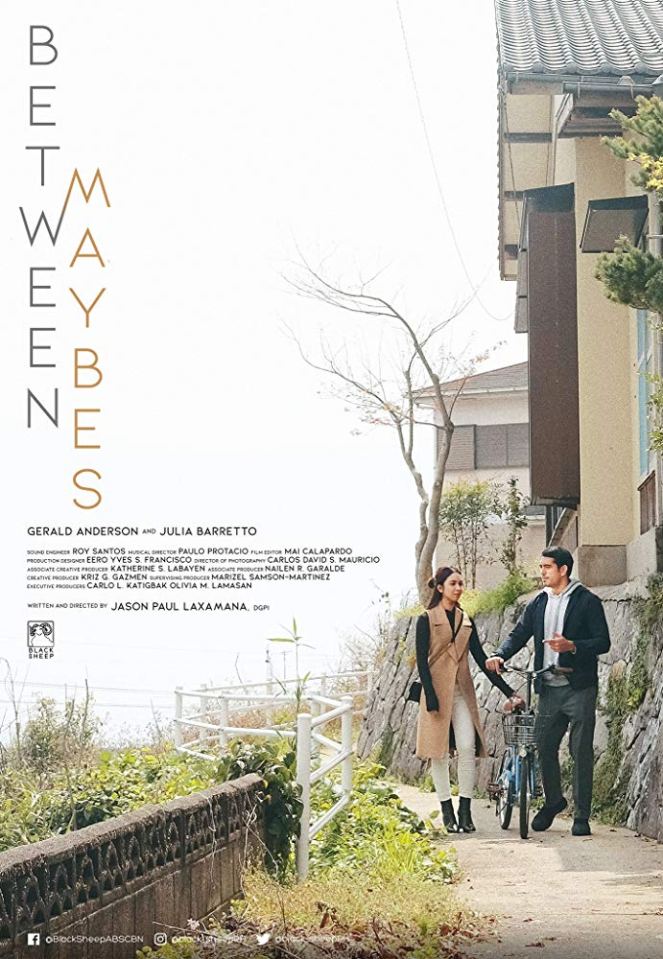 Louie Puyat has been living a solitary life in Saga, Japan until has-been actress Hazel Ilagan arrives. They develop a functional relationship where Louie checks on Hazel during her vacation. Amidst the isolation, the two lost souls find comfort in each other. This movie is directed by Jason Paul Laxamana under Black Sheep Productions.

Between Maybes has a very ordinary plot but what makes it a quality Pinoy Romantic Film is the way they deliver the story-line and the way they gave justice to the beautiful Saga, Japan in the beautiful island of Kyushu. Let me start with the Plot. There is a good move to incorporate the chaotic life of Hazel – a struggling Celebrity who’s fame is about to go down along with family issues and societal pressures in a beautiful and peaceful setting of Saga. It became a contrast on two different worlds wherein Hazel will be able to meet a fellow kababayan Louie who is enjoying his solitude in the peaceful town. What happens next is a series of connection and deep conversations wherein the audience will be brought to the magic of strangers meeting and connecting each other despite differences and status in life. Julia was effective being a strong-willed & spoiled brat celebrity and Gerald has able to maintain the shy-type & timid gentlemen who is fragile & vulnerable. I loved the way the story flows effortlessly from beginning to end. It felt like you are riding on a feather going with the direction of the wind. The story is light and very easy to digest. What I love about Between Maybes is how they were able to crate a good chemistry with the contrasting characteristics of their main leads and were able to translate it on-screen effectively. Also, I must commend Julia & Gerald for bringing the characters into life. I couldn’t think of any celebrities who can portray well the characters of Hazel & Louie. On the other hand, this is Julia’s first ever on-screen kissing scene. The film has the right amount of romance, comedy, drama & bitter-sweet ending. It is realistic as well. The setting in Saga, Japan was the most perfect choice setting of the movie. Glad they went into an underrated location which is actually fit for the demand of the story-line. I am really impressed on how they were able to utilize Saga beautifully. Shots were spot-on. All featured spots were just awesome and breath-taking. I commend the Cinematography for bringing it a notch higher and even comparable with Hollywood. Musical scoring is on-point. I am really proud about this film. My hope for quality Pinoy films is back. For me, this is worth-watching.

Well, we all different takes on Pinoy Romantic Films. The pairing might be new and the story may not please other audiences who are hungry for a dynamic ROMCOM Formula. Between Maybes is a silent killer.