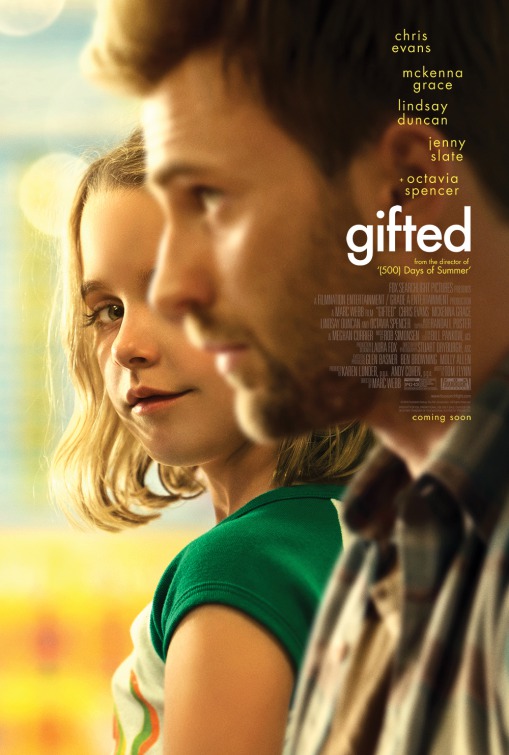 Frank is a single man raising his young niece Mary, who has very exceptional abilities, in Florida. Frank’s plans for a life for Mary are bound to end when Mary’s mathematical abilities came to the attention of Frank’s mother, Evelyn.  Evelyn wanted to provide special education and attention to Mary and she will do anything to prove to the court that the environment Frank is giving is not fit for the child. GIFTED is directed by Marc Webb under Fox Search Light Pictures.

GIFTED is a light-hearted piece that offered something new on the table. I really like the fresh approach on children with special abilities and exceptional knowledge. Also, the movie showed interesting scenes in dealing with these kind of special abilities. It went away with sentimental formula and created a good balance out heartwarming and easy-to-digest scenes. Generally, the film is a feel-good movie. The back story was presented very well and the plot has that little pinch of emotional and comedy at the same time. McKenna Grace is the highlight of the movie. She is just impressive and the role really is made for her. They have a good chemistry with Chris Evans. Their tandem added to the movie’s charm that is why the movie is bearable to watch despite its silent formula. I also admire their dramatic scenes together. Cried for some scenes too. Octavia Spencer is a good compliment too. The whole cast were good. Conversations are easy to grasp with and I loved how they put emphasis on the LOVE OF MATHEMATICS. Nothing extraordinary  though about how they presented in the movie the child’s special abilities. Everything is laid out pretty well.

The story is not demanding of a hardcore drama and a very affecting turn-out. Expect it to be predictable but I think the attack on the story is just right though some audience will be bored on the 2nd half of the film. Worth-watching ONCE only.